A definite step forward in development, the V2 Freewing retains the low PSI mantra of its predecessor, yet has many tricks up its sleeve to make it a real performer on the water. 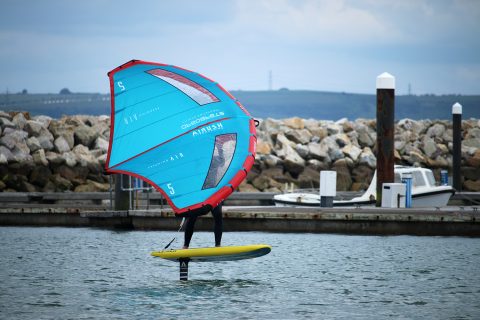 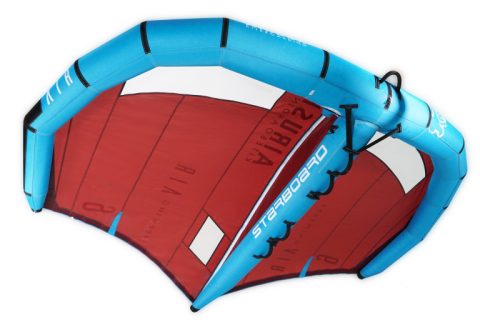 The Freewing is a joint project between Starboard and Airush, the kitesurf brand, and has entered its second iteration for this season. With less handles than its predecessor, it retains a similar planform, boasting quite easily the longest central strut length in the whole group. This long chord somewhat skews the Freewing’s aspect ratio into the lower quarter, despite its wingspan being of average length amongst the group. Inflated via a push in valve connector, this 5.0m is recommended for use with a maximum PSI of five – a very easy amount of pressure to achieve for all. The central strut fills via a single connected hose … and a real plus for this season is the dump valve sited at the head of the central strut, helping to deflate this cavernous chamber at the end of a session. The connection between the leading edge and central strut has been broadened, said to improve structural stability, and there’s plenty of reinforcement along the seams in this critical area. The leading-edge strut also has a distinctly wide diameter, its outline swept back to squared-off wingtips, with Kevlar patches covering their outer surfaces. Looking head-on at the Freewing, it has a soft vee geometry, the canopy loose at rest and playing host to two elongated windows that trace the line of the leading edge. There are a total of five handles along the central strut, as well as two very short and tight Y handles, plus a couple of webbing loops incorporated should the desire for a harness line emerge. Supplied with a large, zippered bag (easily large enough to host the pump too), and an elasticated cord leash whose length is tailored specifically to the wing size, the Freewing is certainly a highly detailed and complete product. And as with all things Starboard there are options … plenty of them. There are at total of seven sizes in the range, and it’s produced in no less than four colourways – something to suit all tastes.

A PSI of 5 is the lowest prescribed pressure for any wing in this test group, yet the Freewing has good structure and rigidity, thanks to the wide diameter struts. We also feel the Y handles play their part in keeping the tension in the framework. Easy to fly in the start position above your head, the Freewing powers willingly when presented to the wind, its canopy filling to display quite a deep camber. There is still a fair bit of flex to the Freewing, yet it generates a good amount of bottom end grunt, the extended central strut providing tangible and useable feedback through the leverage it confers. Once going the Freewing is light and easy in the hands. There is plenty of play available through the three power handles for the back hand on the boom strut and all that used the wing felt that they could find good balance through the handle choice provided, enabling them to trim the wing according to their needs. Stable and dependable, it is also relatively fast and efficient, with reinforcement patches along the canopy’s trailing edge to mitigate flutter. The forward-facing windows are some of the more useful and relevant on the market, providing good visibility, whilst the short wingtips proved easy to unstick quickly if they ever came into contact with the water’s surface, whether it be during getting going or in flight. And in transition the large struts of the Freewing seem to float as if filled with helium! The wing feels light and easy to manoeuvre, the rotation smooth, before powering back up as desired by the pilot. Used for riding waves or swell, the Freewing sits happily in the parked position when held by the neutral handle, with minimal rocking and flutter.