Large in size, appearance and character, the Flywing provides easy accessible power over a wide wind range, encouraging a fluid and flowing style through manoeuvre and transition. 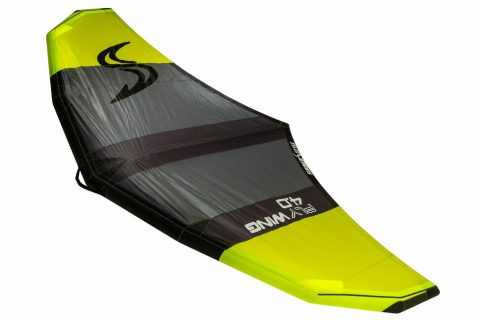 This Flywing is Simmer’s second generation of ‘Flywing’ and is a bit of an enigma, with little information out there in the public domain, so we were pleasantly surprised when one was available for us to test. High aspect in outline, it has easily the widest wingspan and chord length in the test group, making it somewhat large in appearance. Nevertheless, at 2.54 kg it tips the scales with a respectable weight and has a clean minimalist appearance, with little graphical detailing on its canopy or struts. Inflation is carried out through a single ‘bayonet’ airlock valve, the central strut being fed through a single self-inflation tube. Once fully inflated (we had to guess the recommended pressure, as there are no markings, so pushed it up to 8 PSI) the struts are medium to thick in diameter, the leading edge adopting a two-step vee geometry, as the wing tips sit flatter than the deep dihedral central section. Simmer’s UK importer, Farrel O’Shea, told us the Flywing “is made alongside the Simmer sail line, from the world’s recognised best ripstop from Dimension Polyant.” The canopy itself is loose and is scalloped along the trailing edge to mitigate any flutter in flight, with a strengthening yarn sewn into the perimeter to ensure longevity. The wingtips play host to some Kevlar patches for the same reason and Simmer should be commended for supplying the Flywing as standard with an elasticated webbing leash, a pump and a large square rucksack bag, which easily houses the packed down wing. That said, deflation does take a little time, with the only exit route from the central strut being back through the tube.

Starting on your knees, the shear size of the Flywing’s wingspan does make you think you’re on a bigger wing than a 5.0m. Nevertheless, the wingtips fly clean and clear of the water’s surface, providing the time and space to get to your feet. There are four handles provided – two for the front hand and two for the back, the handles themselves incredibly chunky, with a webbing outer and EVA inner. Comfy and supportive for most of the test team, there were a few comments on their size from those with smaller hands. And whilst the looseness of the canopy provides innate softness, the Flywing can be pumped reasonably well thanks to the rigidity of its broad structure. Once going, the power is positive and balanced, the handles in the right place, so as to not pull the rider’s stance out of shape. Stable in flight, the loose canopy also allows for instant depower, meaning the Flywing has a good wind range too, the handles imparting both a sense of connection and control to the wing’s power. In transition the span of the wing does become apparent again; rather than compact and rapid in rotation, the Flywing is smooth and steady, gliding steadily through from one tack to the other, before powering up progressively. Riding swell and waves is also very possible with the Flywing, depowering quickly and remaining nice and stable whilst parked, the neutral handle equally large and chunky, akin to the others.