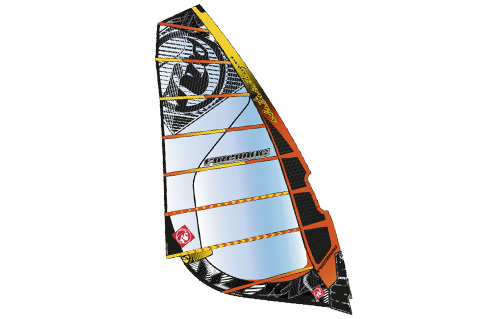 OVERVIEW
OK, so RRD don’t have a presence for their sails on the PWA race scene, but, after dabbling with the Firewing, you get the impression they’re pretty much ready now. The Firewing leads their line as the only cammed sail from John Skye’s loft to-date.  All sizes have 3 cams and 6.2 and below go on an RDM wave mast.

BRAND POSITIONING
‘The 3 cam freerace sail combines top slalom sail performance together with unrivalled ease of use and rigging. The New Firewing will take you faster than ever before … At the same time the fundamental goals of keeping the sail easy to use means the Firewing rigs effortlessly and thanks to refinements in the luff pocket, the rotation is smoother than ever in the gybes.’ (Sic.)

PERFORMANCE
Nice and manoevrable with a friendly, ‘freeridey’ feel, the Firewing automatically puts you in the usual RRD sailing position, with an upright-and-in-control stance – that we found was better with a relatively high boom around the nose. To be honest, there’s not as much natural low-end drive as some of the sails here have, but, as we’ve mentioned in the introduction and in several other reports, if you’re racing, these types of sails are intended to be used well powered-up, if not very overpowered in true slalom scenarios. In wind of up to 30 knots – and with way too much fin under our boards at times – even the heaviest of the group found the Firewing to behave impeccably when pushed to the upper edge of it’s range and we all enjoyed bearing off super broad on it in the hectic swell and choppy water too. Speed-wise it’s not far off the podium-topping brands at all (we sent some pros out drag racing on it too) and in the hands of punters like us the variance between this model and a ‘full-on’ sail will be even narrower. The speed and handling is impressive and carries a strong argument for control in the control vs. power debate. Okay, the Firewing doesn’t have the level of acceleration out of the gybe as the ‘tractors’, but you’re more likely to make it to said gybe and execute the turn in cleaner air on an easier-to-use sail such as this. And ease of use – especially in gybes – is it’s major strength, especially if you’re new to racing, so this is a strong candidate for intermediate/keen amateur competitors to consider for better placings. Just three cams isn’t what makes the difference to the handling – and there are no stability issues at all – it’s the narrower sleeve cut and forgiving draft that that make it so effortless in the hands. We think the Firewing is a perfect pairing for freerace boards or dedicated slalom boards that specialise in rougher water/heavier-going conditions. Of course it’s much, much easier to rig too.

THE VERDICT
Without doubt the easiest slalom sail in this group to use, the Firewing delivers a finer foil and fingertip handling that those who value control will love. Excellent top-end behaviour and good speed make it a prime candidate for newbies to the racing scene.

READ THE OTHER REPORTS

BACK TO TEST INTRODUCTION