A cross to cross-offshore colossus in the world of wave sailing, with more range and practicality than ever before. The cleaner the conditions, the more this board comes into its own. 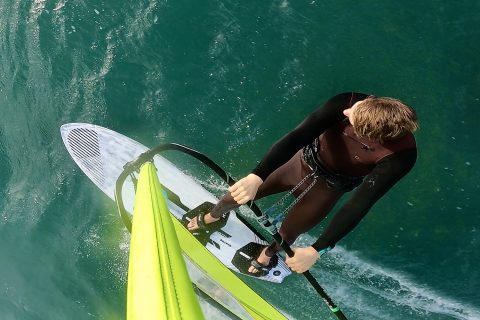 The Pyramid is classed by Quatro as their ‘Surfing Thruster’ and sits in their range as the pinnacle of their wave board lineup, for “industry leading grip through the turns”. Nevertheless, the focus for the new designs introduced this season was to provide more versatility and simplicity, without compromising performance. The Pyramid has been the main focus of most of Keith’s attention, the brand’s two-year cycle allowing the time for more prototypes and design consideration, as well as the time for the team to review some of the best boards of the past. The result of this is a lineup of six all-new designs, with a slightly fuller outline (the board’s wide point shifted further forward) and a tweak to their rocker-line and mast-track position. The rails taper and flow smoothy from the nose to the swallowtail, and the brand’s ‘con-vee’ bottom shape concept has been adopted and enhanced throughout each board size. Produced in the their Pro construction, using carbon monocoque technology, the clean black and white graphics help to display the reinforcement patching and so-called “guts” of the board. The carbon reinforcements through the nose, for example, are clear to see, with a layering build up to provide maximum resistance and durability. Supplied complete with dual density deckpads and MFC’s latest straps, the US and slot box fin box combination has been adopted to enable some extra tuning potential to suit a rider’s personal preference. 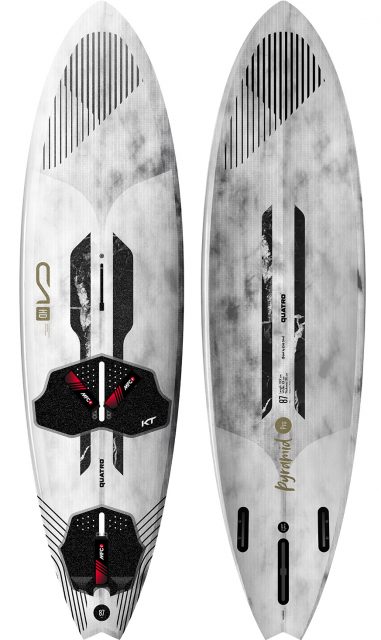 “My goal for the 2022/23 Pyramid Pro was simplicity and having fun in epic wavesailing conditions. In look and feel, the new Pyramid encompasses the core elements in surfing of speed, power, and flow, delivering unprecedented performance in a variety of down-the line wave conditions.” – Keith Teboul.

Having tested the Pyramid 87 last season, we summed it up by stating it, “really deserves to be unleashed in cross to cross off conditions to unravel its top potential.” And whilst it remains every bit the rider’s board for true down the line conditions, there is also more inherent practicality within this new 87. It still feels its size and no bigger at rest, yet deliver power and it releases onto the plane easily, enhanced all the more with some positive rider intervention and technique. Once in the straps, the fittings provide plenty of comfort and connection to the board, pointing impressively as it reaches a good speed for aerial antics on the way out. It has a very planted and controllable nature, cushioning any impact as you ride out over harsh chop, the downforce from the mastfoot keeping the board pinned and providing the confidence to keep pushing. But it’s on the way in, on a wave face that the Pyramid’s capabilities are really realised and appreciated. In cross to cross-offshore conditions, the Pyramid thrives on full bottom turns, dropping down into the flat in front of the wave and projecting the board back up the wave face at speed for a full, complete turn. It’s not so at home in mushy cross-onshore or onshore days, where it sort of feels out of place, like a Ferrari stuck in a traffic-jam, albeit with enough quick release and speed to make the best of the situation. The ability to fine-tune the fin setup and placement, through the new box configuration, is also a real bonus and helps to enhance the Pyramid’s adaptability. Yet it’s on clean open faces that this 87 has the opportunity to really demonstrate the aggressive amount of grip and bite possible. What is more, with its extra width and easier release compared to its predecessor, this new 87 has more scope and versatility to contend with the changeable conditions we often experience in the UK.

Bottom shape: Vee throughout, with a wash of double concave most pronounced in the shoulders and mid-section.

OTHER BOARDS FEATURED IN THE LINEUP