Eye-catching both on and off the water, the Wave Cult 88 has real life and fervour to its riding style, capable in all wave environments and ensuring the rider never has a dull moment on the water. 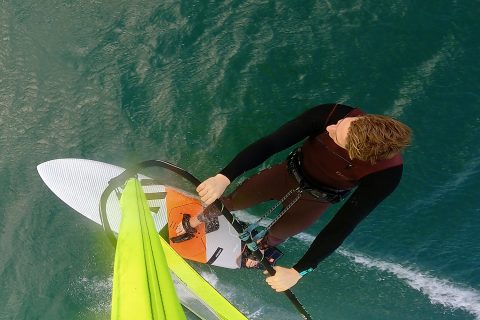 The Y26 Cult remains unaltered for this season – a range of four board sizes from 74 to 94 litres, designed for use in all wave conditions. We tried the 82-litre version back in late 2020, so now’s the turn of the 88-litre sibling. Short and wide, it has a compact outline, its most noticeable feature being the massive stepped-wingers in the tail. It means the Cult’s outline is relatively parallel, retaining plenty of width and buoyancy in the rear (with one of the widest one-foot off measurements in this class), before narrowing to a small, angular and aggressive swallow tail shape. On the underside the Cult also exhibits a unique bottom shape, with a channel incorporated into a mono-concave, placed under the rider’s stance, to display what RRD are calling a ‘triple concave hull’. It’s a neat design and the brand believe they’re onto something – stating it “is the new status quo on wave boards”, said to provide “next level” early planing, speed and grip in turns. There are five slot boxes supplied in the rear, to facilitate any configuration or preference, yet supplied as a thruster in the form of some orange K4 fins – a Scorcher 18cm centre and 10cm Shark II sides. The deck is domed throughout, the weave of the biaxial carbon Innegra showing through in the graphics forward of the mast track, whilst in the rear, the RRD Velcro straps (which still require some persistence to make big enough for boots) are mounted upon dual density diamond grooved deckpads. Double screws are employed in the back strap to eliminate any twisting; the front straps remaining single screw as standard. The compact shape eases manoeuvrability on waves as well as a feeling of control in turns and in the air. The innovation lies in the Mono-Tri-V bottom shape which gives unrivalled levels of speed, drive and grip.

On the water, the Cult 88 provides an alert and engaging ride that had us both captivated and inspired to push harder. First impressions as you step on is that it certainly supports the quoted volume, feeling compact yet corky underfoot. It releases easily as power is applied, responding well to being redirected off the wind and stepping back early, the rider’s stance located relatively far back on the board. Lively and active underfoot, it has a loose skatey nature and feels as if it’s asking to be thrown around as you charge out through a break. It certainly has enough release and spark for the close-quarter work enforced by cross-onshore, even onshore conditions, punching out through the whitewater and with enough drive to remain your ally in challenging situations. On the wave, the Cult took a little getting used to initially, with some of the team going in too forcefully and catching the shoulders. You soon learn to adjust though (and my gosh, there’s plenty of progression available), learning to trust the board and letting it do the work. Balance the turn initially through both feet, but quickly transferring to the back foot mid-transition and the board responds with a wicked amount of grip. It’s as if it is suddenly in a hurry back up the face, playful transitioning from rail to rail, its loose rearward nature allowing it to fit into tight cross-onshore pockets and make the most of the smallest wave. There is also plenty of adaptability through the multitude of boxes to really fine-tune the 88 to suit most riding styles, and we’re sure it’ll make the experimentation both fun and rewarding.

Bottom shape: Subtle vee in the nose transfers quickly to a mono-concave at the shoulders, which continues all the way to the wingers, finishing in a vee double concave. The channel is 20 cm wide and runs from below the mast track to the side fin boxes.

OTHER BOARDS FEATURED IN THE LINE UP